Nature provides humans with healing materials for so many of our health issues. It even provides a substance that can help to naturally deodorize our bodies. Chlorophyll is nature’s internal deodorizer.

Chlorophyll is the green pigment present in plants and algae. It allows plants to absorb sunlight, which is then used in the plant’s photosynthesis process that converts light energy into chemical energy. Evidence shows that chlorophyll is not only crucial to plant life, but that it can be beneficial for human health, as well.

A study published in 1980 in the USA looked at the health benefits of chlorophyll in the care of geriatric hospital patients. The patients were given 100 mg of chlorophyll in chlorophyllin form each day.  After two weeks, chlorophyllin was shown to help in controlling body and fecal odors.1 Patients also experienced a reduction in chronic constipation, with some additionally experiencing relief from flatulence.  Some decrease in urinary odor was also noted. Based on these observations, chlorophyllin is often recommended for patients with colostomies and incontinence to reduce related odors.2

An earlier observational study by Dr. Frank Westcott in the 1950’s, suggested that chlorophyllin could be beneficial to reducing bad breath as well as body odor.3

It is believed that chlorophyllin may have detoxifying properties within the body. Chlorophyll has also been shown to be a more powerful antioxidant than beta carotene, vitamin C and vitamin E.4

If you’re seeking to “freshen up”, consider a chlorophyllin supplement with over 100 mg per dose. Look for a clean chlorophyll source from non-GMO alfalfa, extracted by super-critical processes without heat. Liquid chlorophyllin can be taken diluted in water, juice, smoothies or yogurt. 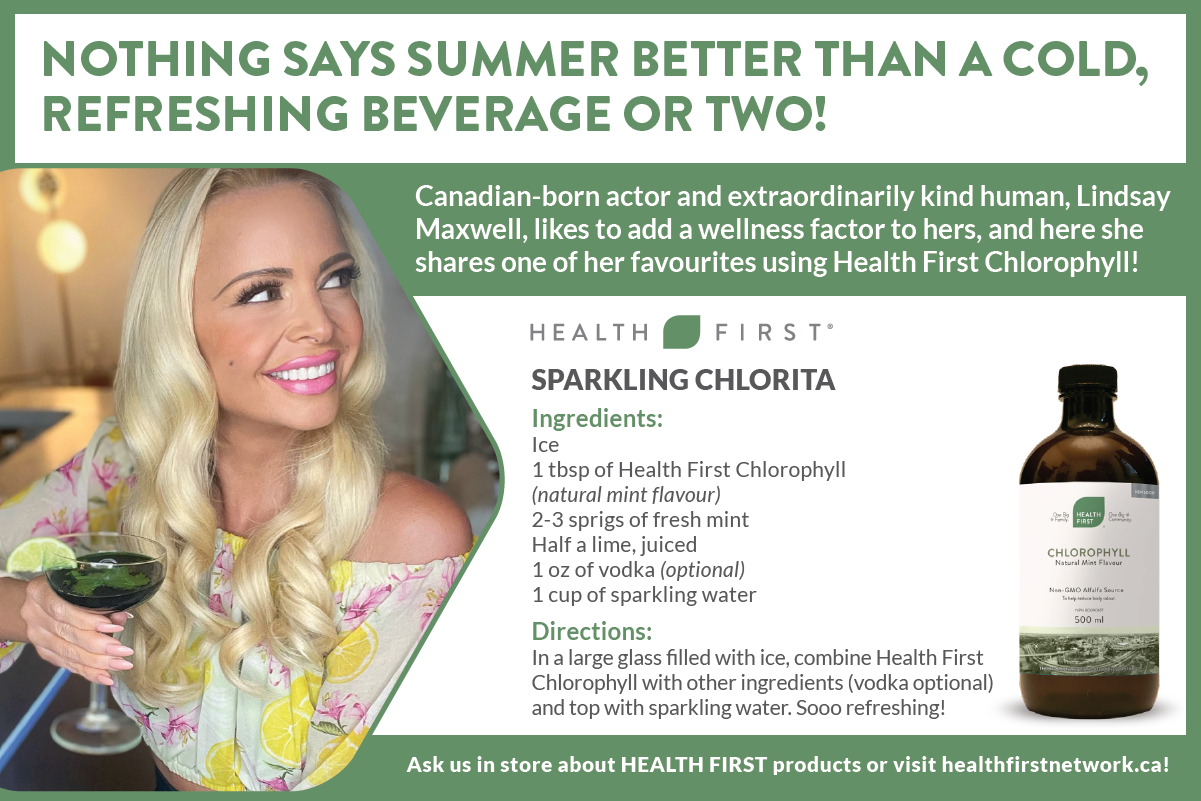 NOTHING SAYS SUMMER BETTER THAN A COLD, REFRESHING BEVERAGE OR TWO!

Canadian-born actor, Lindsay Maxwell, likes to add a wellness factor to hers, and she shares two of her favourite using Health First Chlorophyll.

In a large glass filled with ice, combine Health First Chlorophyll with other ingredients (vodka optional) and top with sparkling water. Sooo refreshing!

About the Author: Health First Network

Health First Network is Canada’s leading membership group for independent health & wellness retailers and the exclusive supplier of the premium Health First supplement brand. There are over 130 independently owned and operated retail Members across the country. Click here to learn more about Health First.